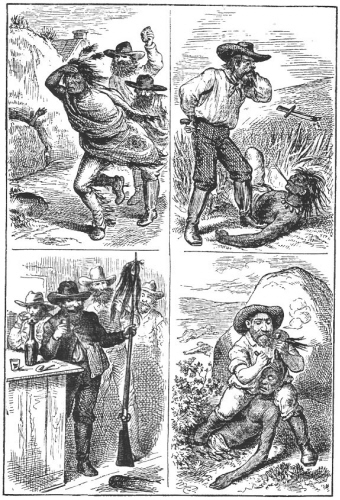 The artist who drew the cartoon is unknown. However, the message it relays, the wanton slaughter of American Indians, is right on the button. During the 16, 17, and 1800s, hundreds of proclamations were issued by colonial governors, and, after the American Revolution, state governors, which offered monetary rewards for the scalps of Indigenous men, women, and children.

The people of our Frontier carry on private expeditions against the Indians, and kill them whenever they meet them. And I do not believe there is a jury in all of Kentucky who would punish a man for it. - John H. - Major, U.S .Army

Damn any man who sympathizes with Indians. I have come to kill Indians, and believe it is right and honorable to use any means under Gods Heaven to kill them. - Colonel John Chivington

What value did European colonial invaders place on the lifes of American Indians? None!

On February 2, 1994, after the first edition of We Were Not the Savages was published in 1993, I received a congratulatory letter from Charles Saunders, a former columnist with the (Halifax) Daily News, which relays in stark terms that it was nil.

"Several years ago, I watched a panel discussion that had several minority members, including a Black and a Micmac. The Micmac representative said that Blacks were slaves in the early days of European colonization, but his people were lower than slaves.

At that time, I didn't understand what he meant. What, I wondered, is lower than being a piece of property to be bought and sold like a horse or cow? Then, in the chapter of your book titled "The Edge of Extinction," I read about how your people were systematically starved to death. At least a slave gets fed, simply because the owner has a vested interest in keeping him or her alive to maintain the slave's value as property. So, thanks to you, I know what it is to be "lower than a slave"--to not even have value as human chattel or property."

Francis Parkman, an American historian, described how the mistreatment of the Amerindians varied at the hands of Europeans: "Spanish civilization crushed the Indian; English civilization scorned and neglected him; French civilization embraced and cherished him." One can take issue with Parkman's observation about the English. What he said is true, but the English, like the Spanish, also crushed the Indian, as witnessed by their barbaric treatment of the Amerindians indigenous to the eastern coast of North America.

During colonial times, as far as I can determine it wasnt a crime to kill an Indian in most places in the Americas. I state this because I haven't, in all of the mountains of 17th, 18th, and 19th century historical documentation that I've read about First Nations Peoples, found a single incident where a white person was prosecuted and convicted for killing an Indian in this region.

However, the First Nations Peoples of the Americas, until very recent times, were not alone in being treated as nonpersons by Europeans. I read the following from a Holocaust poster displayed at a Human Rights and Holocaust Conference that I participated in Moncton, New Brunswick, April 26/27, 2001. The mentality that begot it is the same as the mentality used in the Americas to deprive Native Americans of everything:

Herman Ahlwardt made these comments about the validity of the citizenship of Germany's Jews in a speech he made to the Reichstag in 1885:

"The Jew is no German. If you say that the Jew is born in Germany... has obeyed German laws, has had to become a soldier--has fulfilled all his duties, has paid his taxes.... all that is not decisive for nationality... only the race out of which he was born is decisive."

Please click to read about The Doctrine of Discovery: http://www.danielnpaul.com/DoctrineOfDiscovery.html