HALIFAX - Archaeologists are showing off a treasure trove they call one of the most significant discoveries of Mi'kmaq artifacts in Nova Scotia.

Hundreds of arrowheads and tools, some 8,000 years old, were discovered last summer along the Mersey River, near Kejimkujik National Park in the southwest region of the province.

Workers from Nova Scotia Power were doing repairs to generating stations on the river. As water levels dropped in some areas, the riverbed was exposed for the first time since dams were built 70 years ago.

Suddenly hundreds of artifacts appeared in the mud.

Pottery fragments, spear points, knives and other items were found around 109 ancient campsites.

One barbed harpoon was once used to spear salmon and eels 3,000 years ago, Stewart said.

Since the artifacts were lying on the surface, the RCMP was brought in to control looting. Even the discovery was kept a secret.

"I think this is vitally important," Mi'kmaq historian Daniel Paul said of the find.

"There was a real functioning civilization here when the Europeans began to come here en masse, but the proof has been virtually destroyed. And all of a sudden we are finding the proof."

The Mersey River encampments are once again under water.

The artifacts will be sent to the Nova Scotia Museum once Stewart and his team finishes sorting them.
Copyright © 2005 Canadian Broadcasting Corporation - All Rights Reserved 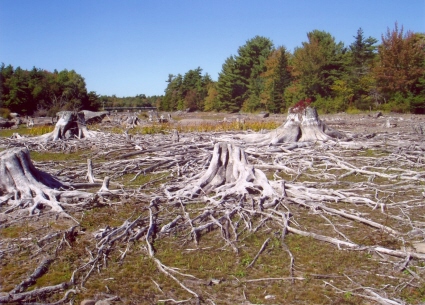 When water levels were dropped on the Mersey River last summer so repair work could be
done on power dams, it exposed the river bottom and areas which had been flooded for
decades. Archeologists found Mi'kmaq artifacts on the river bed dating back thousands of
years. 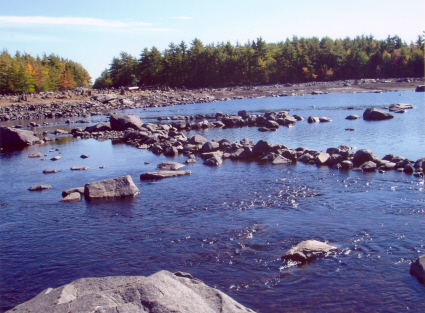 Archeologists estimate this fish weir on the Mersey River could be 4,000 years old. The weirs

Lisa Francis remembers sitting on the bank of the Mersey River staring at the dry riverbed, contemplating her heritage, when a huge bird landed on the opposite bank. As soon as she saw the majestic bald eagle she knew that what was being done on the river had her ancestors' approval.

All last summer she watched quietly with conflicting thoughts as archeologists roamed the dry river bed near Liverpool, collecting artifacts left exposed as the waters receded. Overhead, bald eagles, a powerful symbol for the Mi'kmaq, kept watch as the work progressed.

Upriver, at Indian Gardens on the shores of Lake Rossignol, Danny Francis, a Mi'kmaq fisherman, tended to his barrels of eels. He was thinking about the weirs he and his grandfather built on the river when he was young and how those weirs resembled the ones that archeologists were uncovering on the river bed - weirs they estimate to be up to 4,000 years old.

It gave him a sense of place.

Nova Scotia Power was conducting extensive repairs to the six generating stations it operates on the river for a four-month period last summer.

Since the work was being done in an area of acknowledged historical significance and Nova Scotia Power was following the requirements of the province's Special Places Legislation, it engaged an archeological consulting firm, Cultural Resources Management (CRM) Group Ltd. of Halifax.

What the archaeologists uncovered amid the moonscape of stumps and rocks on the dry riverbed was a wealth of artifacts that indicated many ancient camp sites. The findings will add more than 100 Mi'kmaq sites to the 685 that have already been confirmed in Nova Scotia.

Archeologists also collected more than 10,000 artifacts for further study and eventual display. Embedded in the muddy riverbed were fragments of native pottery, a wide range of flaked and ground stone tools - including spear points, knives, axes, adzes and gouges - as well as stone chips or flakes left behind from tool manufacture. A distinctive feature of this period was large woodworking tools made by grinding hard igneous types of rock.

Ms. Francis, the economic development officer for the Acadia First Nation, whose office is in Milton, up the river from Liverpool, watched the archeological work and marvelled at what they found.

"At first it was a worry about what would happen to the artifacts, but as the work progressed it became a learning experience," says Lisa, who grew up off reserve but later moved to the nearby Ponhook reserve.

"I took a lot of time on my own, on weekends, to view the items. And seeing the fish weirs that my forefathers may have built, it brought a connection closer to home."

Roger Lewis, an expert on fish weirs, says that as a Mi'kmaq archeologist he feels a responsibility to make sure that the items found on the riverbed are understood by future generations. Mr. Lewis worked with CRM Group on the early stages of the project.

He says there were four types of weirs built on the Mersey, depending on the species of fish being caught. He was amazed at the good condition of some of the newly rediscovered weirs, which date back thousands of years, crediting the flooding with protecting a lot of the cultural resources.

"It was a humbling experience, discovering just how organized and knowledgeable our ancestors were," he says.

Lake Rossignol and Indian Gardens were known gathering places for the Mi'kmaq over the millennia and are part of 11 primary water sheds in southwest Nova Scotia, where Mi'kmaq are known to have assembled to fish and harvest other food sources.

Thirty-three other river systems in the province may hold similar riches, says David Christianson, curator of archeology at the Nova Scotia Museum.

"The archeological record is like a book," says archaeologist Bruce Stewart, president and senior consultant at CRM. "But a book of which three-quarters of the pages have been ripped away."

For decades, local residents have been collecting artifacts along the Mersey. Although the practice became illegal with the passing of the Special Places Protection Act in 1980, collectors continued to be a problem throughout last year's field program.

Nevertheless, CRM was able to collect a ton of artifacts from the riverbed, some in pristine condition, along a 20-kilometre stretch.

As part of the documentation process, all of the artifacts will be catalogued and their locations plotted on site maps.

"The identification of a number of Archaic Period sites was absolutely fantastic because we don't know much about the archaic period in Nova Scotia," says Mr. Stewart.

The Archaic Period, 9,000 to 2,500 years ago, was a period of dramatic geographic, climatic and vegetation change.

Mr. Stewart holds up an ulu, a semi-circular knife used to process sea mammals - a tool still used by the Inuit. It's made from a piece of slate with bevelled edges and is about 4,500 years old, making it one of the most spectacular recent finds.

A stone harpoon head was in such perfect condition that Mr. Stewart says when he saw it he dropped to his knees to examine it closely to confirm that it wasn't a modern piece of plastic. It was an outstanding example of groundstone technology.

Some of the tools found were made of stone not native to the area and may have come from the Fundy shore, carried to the Mersey encampments by Mi'kmaq travelling across the province by canoe.

Novelist Thomas Raddall, who worked for the Mersey Paper Company, noted in his 1976 autobiography, In My Time, that local Mi'kmaq told him that the Saakawachkik (the folk of the olden time) made seasonal wanderings up and down the river and along the coast.

But Roger Lewis is not convinced that his ancestors made only seasonal visits to this area. He thinks that, because of the wealth of fish and game, it may have been a year-round "subsistence region."

"As a Mi'kmaq archeologist I feel I have a responsibility to make this understood and, once it is understood and pieced together, we'll get a broader understanding of the Mi'kmaq and the land."

John Soosaar is director of communications for Nova Scotia's office of aboriginal affairs. He is a former reporter for the Canadian Press.

He can be contacted at: soosaajo@gov.ns.ca