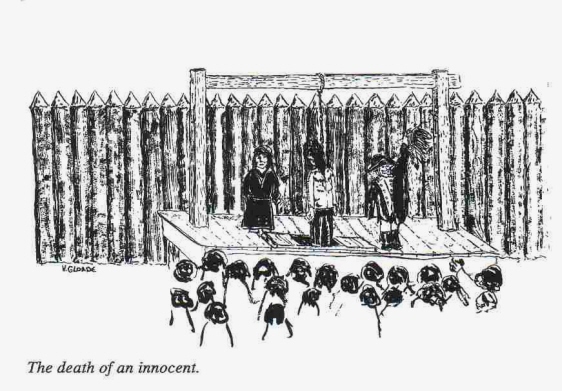 ENGLISH JUSTICE
Death of an Innocent

After the English assumed control over Acadie in 1713, they employed several horrific methods to try to terrorize the Mikmaq into submission, including holding some of their number hostages at their Forts. The following is an example of the cruelty they employed.

At a Council meeting held on July 8, 1724, at the house of Lt.-Governor John Doucett, in His Majesty's garrison at Annapolis Royal, a motion was passed, in order to try to terrify the rest of the Mi'kmaq into submission to the British Crown, to execute at random one of the Mi'kmaq hostages:

"Whereas, the savages of this His Majesty's Province of Nova Scotia...have committed in open enmity and rebellion;

"And Whereas, to defend against such barbarities, several of their people were seized and detained as prisoners which induced several of the savages of this river to submit to the government, and promise to demean themselves peaceably...upon which promise the Indian prisoners here were treated with all humanity and kindness...being made to understand at the same time that if any of his Majesty's subjects were murdered near this garrison, or any shot fired against it,...reprisals should be made upon the prisoners in our keeping...

"It, is our opinion, that since all the kind usages this barbarous people have received seems rather to render them more inhuman and treacherous, it will be for His Majesty's service...to make reprisals by the death of one of the savage prisoners in custody, to deter them from any further outrage, when they will lay under the fear of loosing nine more still left in our possession."

Shortly thereafter, a young Mi'kmaq Chief, who stood neither accused nor convicted of any crime, was unceremoniously hung. This act of barbarity, by what was touted to be a "civilized" government, is indefensible. Perhaps the most condemning fact is that no one was ever held accountable for the crime. And since no one was ever held accountable, one can easily conclude that it was condoned by the highest levels of British government.