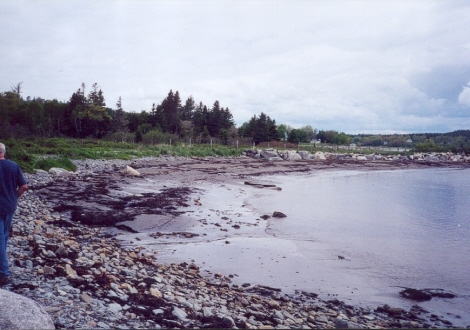 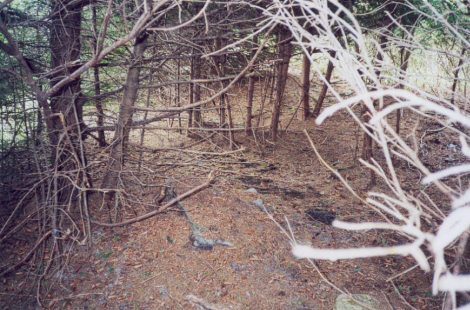 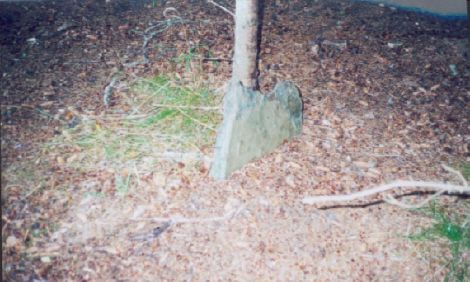 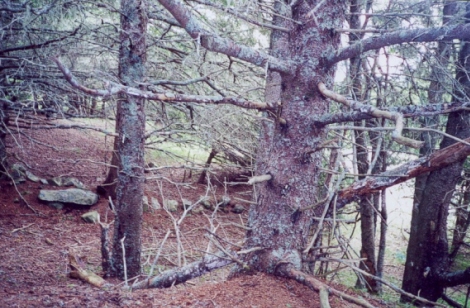 Remains of a Stone Wall

Nestled peacefully beneath the sand of Mother Earth, overlooking the Atlantic Ocean, in a plot of land surrounded by Spruce Trees, rests the remains of ancestors of many of todays Mikmaq and Acadian citizens. It is located near Sperrys Beach, northwest of Indian Hill, Indian Hill Pond and Indian Point.

Today, you will find only a few headstones and a few large flat rocks sticking up through the sand that has washed and drifted over the site during the decades. There is also the ruins of a stonewall that was approximately four feet high. Over the years, this sacred burial ground has been subject to bulldozing and grave robbing.

The Mikmaq lived in Petite Riviere during the spring and summer and perhaps to some extent throughout the year as well. Local legend reports that they brought their dead to the Sacred Burial Ground in the spring and buried them just northwest of the pond. The surnames of some of those interred there, Jeremy, Labrador, LeJeune(young), Malti (Martin), Francis, Paul and Gloade, lend support to the legend.

In 1808-1809- Paul Malti was the Chief of the Mikmaq residing on a reserve on Fosters Point, Queens County. Ella Letson states: He was a great friend of my grandfather Asa Morine.

The Mikmaq residing at Fosters Point buried their dead at Petite Riviere. Ella told me that her aunt said she could remember the people chanting as they rowed down the river from Port Medway to Great Island, where they portage to the other side and continued to Petite Riviere, where they held a burial ceremony. When a Catholic cemetery was established at Fosters Point they buried their dead in it in order to save them the long journey to Petite Riviere. ( Interview with Ella Marguerite Letson to Blake Conrad April 4, 1983. Ella was the great granddaughter of Dorcas Cahoon Morine who was born in Salem, Mass who lived to be over one hundred years old. Extracted from the  Old Man Told US).

The foundations of buildings formerly occupied by the French can be distinctly traced on the grounds adjacent to the burial ground. It is said that a small chapel once stood there and that the Indians in large numbers encamped on and about the site. They had a canoe shaped hole in the earth, where they framed the boats of bark with which they so skilfully breasted the restless waves. Old cellars and remains of a fort are seen near the residence of the late John G Sperry, Esq. Cannon balls and chain-shot were taken from the ground by him. He said that he found on his premises a depth of two feet below the surface; a deposit of clam shells over half an acre in extent. (Extracted from the History of Lunenburg County by MA Desbrisay.

Although there was never an archaeology dig, arrowheads, spearheads, potsherds, layer of clam shells, metal knives, axes and kettles obtained from the French, Indian relics and stone arrowheads have been picked up along the shore by the site of the encampment. Abundance of clam shells have been found in villagers gardens.

When I interviewed one of the grave robbers who desecrated the Burial Ground in1953, he related to me that the bodies were buried head to head. The bodies were wrapped in bark and were covered with large stones. One of the graves contained a piece of iron that looked like a horse pistol, an iron spear head, and something that looked like a knife and the skull of the deceased had been shot above the ear. It was a hole about two inches long and about three quarters of an inch wide. It was like it had been made with a musket ball. The bodies were laid about one foot apart and pointing in opposite direction. There was one stone for two bodies. They may have been laid out in four directions.

The artefacts of the graves were sold to Ron Fielding of Boston. There is a museum in Boston that has arrowheads and tomahawks from the area.

An article in the Progress Enterprise, in 1955 written by Roy K Cooke tells us the old graveyard has rough slabs of stone for markers and drifting sand from the beach below is almost covering the spot. The remains of the rock wall that once circled the graveyard are almost disappeared. The French sailors, soldiers and settlers buried here helped to guard the fort and farmed the land on both sides of the narrow river. Now the only reminder of these explorers from St. Malo at Petite Riviere is the lonely graveyard.

Through this research and working with the Nova Scotia Museum and the help of others, I have accomplished getting the burial grounds protected from any more destruction. It now is protected under the Cemeteries Act. The burial ground is presently a part of a pasture.

In an interview with the owner David Himmelman, September 21, 2004, he agreed give us permanent access to the burying ground, so we could clean it up, restore it and erect a fence. This burying ground is our only link to our ancestors of long ago and is a very important part of our heritage.

My hope for the future is that I can acquire the resources to restore the Burial Ground to a place fitting for the eternal peaceful sleep of those resting there.