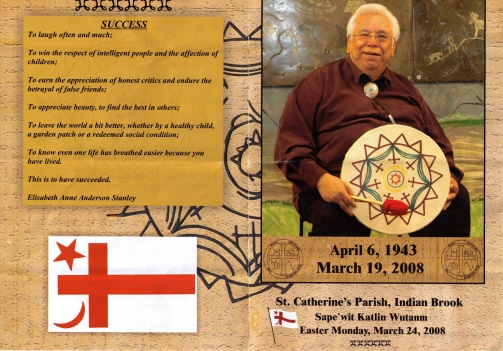 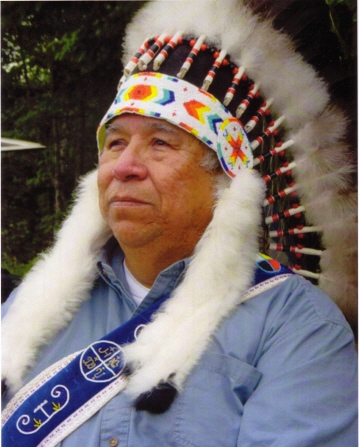 Frank In Headdress
Taken while he was hospitalized 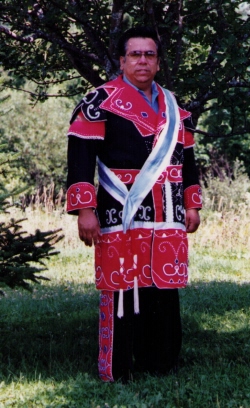 Frank in his prime

A fitting goodbye was held at Shubenacadie on March 24, 2008 for Frank. He was always a family man, who took pride in his community. Each year he was part of the Santa Claus parade, which he helped start with members of the community's fire department. After the funeral service, his remains were taken on a fairwell Santa Parade.

INDIAN BROOK  Frank Nevin Sr., a Mikmaq leader who passionately shared his culture with others through sweetgrass ceremonies, drumming and stories, died in a Halifax hospital early Wednesday.

"Hes going to be missed very much in many communities," Chief Ben Sylliboy of the Mikmaq Grand Council said in a telephone interview.

"He was a well-known, kind and helpful man who tried to help as many people as possible, whenever possible."

Mr. Nevin, 64, of Indian Brook was a captain with the Grand Council, which has 38 members from the Maritimes and Quebec.

Grand Chief Sylliboy said Mr. Nevin took his role with the Grand Council very seriously, reaching out to people who found themselves in unfortunate circumstances and volunteering in his community.

Friends say he had been sick for quite a while and was in and out of hospitals in Truro and Halifax since last year.

They also say he was passionate about sharing his culture with natives and non-natives alike at public functions throughout Nova Scotia, the Maritimes and even in the United States.

"He always wanted to talk about his nation, his family, his language, his culture, his faith," said Father Tom Kurudeepan of St. Catherines Roman Catholic Church in Indian Brook.

He described Mr. Nevin as a people person and very jovial, and a wonderful next-door neighbour who was always checking to make sure he was OK.

"Even in times of sadness, he had a way of keeping people upbeat."

David Nevin said his brother had a great sense of humour and was well-loved and well-respected locally and internationally. For example, he made an annual pilgrimage to Massachusetts to represent Mikmaq people and the Watertown Treaty of 1776 at the opening of the legislature.

"But you know what I really liked about my brother. Hed always say, Dont speak English. Speak Mikmaq. Hed always speak Mikmaq to me. He was proud of his culture."