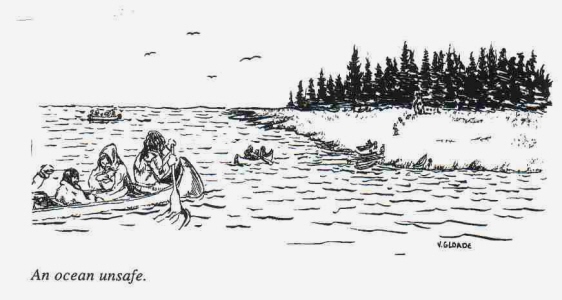 Moving to secure the community

Quoted from We Were Not the Savages

On June 24, 1497, John Cabot laid claim on behalf of England's King Henry VII to what thereafter would be called Newfoundland. The fact that the land was then owned and occupied by human beings whose residency stretched back for millennia was not viewed by Cabot or England as a legal impediment to this claim. In addition to appropriating another Nation's land, Cabot's explorations revealed for future European exploitation the region's fabulously endowed fishing grounds. These events soon led to a full-scale European invasion of northeastern North America.

In retrospect, the speed at which the news of the wealth of the Newfoundland fishing grounds spread around Europe in an age without mass communications seems incredible. This news spread so fast and proved so alluring that within a very short period of time European fishermen began arriving en masse. By 1506, only nine years later, the fishery was so large that the Portuguese government was taxing it. This uncontrolled and largely unpoliced foreign fishery would prove to be extremely bad news for the region's Amerindian peoples. In fact, the nature of the bad news was visited upon one Amerindian Nation almost immediately. The intruders launched a murderous assault on Newfoundland's harmless and non-aggressive Beothuk (or Red People) in retaliation for the "crimes" they were committing by removing items, such as nails, from the fishermen's fish-drying stations along the coast. As early as 1506, many of the Beothuk were being sold as slaves in Europe. In time these barbarities led to the extinction of the Tribe...

...the Mi'kmaq earned the dubious distinction of being among the first North American Natives to come into major contact with Europeans. Because of the scarcity of reliable information related to events in the area during the early 1500s, one can only speculate about what the Mi'kmaq were thinking about the intrusion. Assuming that their fishing and trading activities would have made them aware of the horrors being suffered by the Beothuk, one can conclude that they probably had a strong premonition of bad things to come. It is not much of a stretch to further conclude, given the well-documented and horrific assaults against lightly armed Amerindians by heavily armed Europeans at many locations in the Americas, that bad things were already happening. It doesn't appear that the Mi'kmaq were involved at the time in open hostilities with the fishermen, but they could easily have fallen victim to the slave trade.

Fishermen participating in this repugnant activity would have put unaccompanied individuals and small groups of Mi'kmaq at high risk, because selling Amerindian captives to Europe's slave traders was a very lucrative sideline for some of them. Therefore, one can assume that more than a few Mi'kmaq mysteriously disappeared while out fishing and hunting and, unbeknownst to their fellow citizens, ended up being killed or sold into slavery.