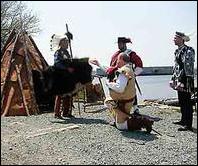 Photo by MARK ROBERTS
Samuel de Champlain landed on the South Shore of Nova Scotia in 1604.
The scene was re-enacted in Brooklyn last year during the 400-year
anniversary celebrations. Relations between the Acadiens and the Mi'k-
maq were so cordial during the centuries that followed that no separate
Maritime Métis nation ever arose, says historian Daniel N. Paul. Mixed-
blood children were happily accepted by both communities.
Maritime Métis? Or opportunists?

WHEN FRENCH explorer Samuel de Champlain landed on the shores of Nova Scotia in 1604, he was greeted by the Mi'kmaq with hospitality. These initial congenial meetings sowed the seeds for an alliance that would last approximately 150 years. The positive offshoot of this for the French was that their future settlement efforts of the province were not opposed by the Mi'kmaq.

Shortly after French settlement began, related to the aforementioned acceptance of each other, romance began to blossom between some members of the two communities. As time progressed, intermarriages occurred, resulting in many children of mixed blood.

The children of such unions were not rejected by either the French or Mi'kmaq communities. In fact, contrary to what some individuals from the Acadien community are claiming - they want to be considered Métis by the courts for the purpose of availing themselves of Mi'kmaq aboriginal hunting and fishing rights - the children of mixed marriages were readily accepted by both sides. If the preference of their parents was to become part of the Mi'kmaq community, or the Acadien, they were accepted as such by both.

This is supported by the fact that no separate settlement has ever existed in Nova Scotia in which people of mixed-blood ancestry had to live segregated and scorned by the Mi'kmaq and Acadiens. They were fully accepted by both communities as sisters and brothers.

Adding strength to such a declaration is the fact that Acadiens have elected several mixed-bloods to represent them in the Nova Scotia legislature. Incidentally, many of them have served the Acadien community well as cabinet ministers in various provincial governments. For instance, under John Buchanan's Tory government, Gerry Doucet held several high-profile portfolios. On the Mi'kmaq side, many mixed bloods have been elected chiefs.

The end of the unique Mi'kmaq/Acadien relationship was ordained in 1763 by the signing of the Treaty of Paris, which gave Nova Scotia permanent English rule. Because they had to struggle to survive in what had become for them a hostile social environment, it caused a drifting apart of the two communities. They had to adopt English as a second language, and suffered overt racial discrimination and, because both communities were mainly Roman Catholic, religious discrimination.

However, amongst most Acadiens, even though the formal relationship had ended, the Mi'kmaq were still accepted as equals. This is how Elsie Basque, the first licensed Mi'kmaq teacher in Nova Scotia describes it: "I grew up in the area of Nova Scotia known as Clare ... an area where one is accepted for who and what one is, not on ethnic background. The bonds of friendship and understanding that began with Chief Membertou, Champlain, De Monts, Poutrincourt, have never faltered. Their legacy lives on."

But, under English rule, because the Mi'kmaq were people of colour, they suffered the most from racial discrimination. Our ancestors were totally excluded, no exceptions. Starvation was rampant among them until Confederation, then under Canadian jurisdiction, they lived in a state of malnutrition until the mid-1900s. Even today, the exclusion continues. There has never been a Mi'kmaq judge, MLA, MP, Senator, senior bureaucrat, etc.

However, with the passage of time, the racial and religious discrimination suffered by the Acadiens, including those with First Nation blood, has slowly abated. Consequently, although still suffering some residual racial discrimination because of their French ancestry, they are included in most aspects of modern Nova Scotian life.

From the aforementioned, one can draw no other conclusion than that a Métis community never existed in Atlantic Canada. History speaks for itself: mixed-bloods were not shunned by either the Acadien or Mi'kmaq communities. Then why the present court claim by a handful of Acadiens that they are Métis and, as such, are entitled to access Mi'kmaq aboriginal and treaty rights?

I'll try to provide an answer in as few words as possible. What we have in this country today is a large body of individuals who are trying to claim aboriginal and treaty rights that legally, morally, and unconditionally, belong to First Nations Peoples. The majority of these people have minuscule amounts of First Nation blood in them. They are not, and have not, been associated in any way with First Nations for generations.

Probably, they can best be described as opportunists, motivated by greed, taking advantage of a legal loophole provided by the insertion of the word "aboriginal" into Canada's Constitution by Pierre Trudeau when he repatriated it from Britain in 1981. The inclusion of it permits the courts, at their pleasure, to apportion the aboriginal and treaty rights of First Nation Peoples to any person who comes around claiming "aboriginal" heritage. The courts have done so with abandon.

In the name of justice for First Nations Peoples, it's time the courts re-evaluated their track record on awarding aboriginal and treaty rights to non-First Nation communities and reverse gear. If not, history will hold them instrumental, if not fully responsible, for the final extinction of First Nations, a crime against humanity.

It's also time for National Chief Phil Fontaine and his peers, the band chiefs, to take their heads out of the sand and take action to try to stop the further erosion of First Nation rights by the courts. By ignoring the issue, they are putting the very existence of our communities in mortal danger of being eventually declared assimilated.