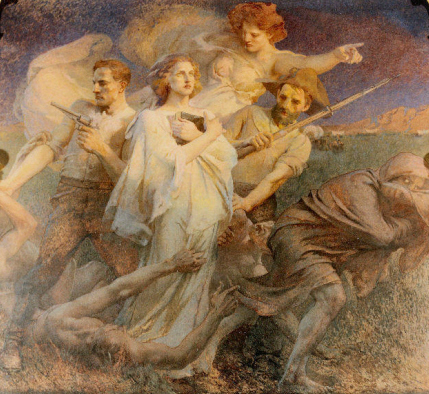 APOLOGISTS for European colonial brutality have often criticized me for baring for public examination the genocidal crimes committed against the indigenous populations of the Americas by colonial leadership after 1492. Especially irritating is the accusation that I use today's standards when judging the criminals. Why not? Today's standards, although more sophisticated, are just as low as they were five centuries ago.

For proof of the veracity of this statement, I'll give a short overview of the crimes of just three colonial officials who are indefensibly honoured as heroes by the majority of the Euro-descended population of North America, then offer comparisons of modern brutality.

A piece in Column of the Americas, by Patrisia Gonzales and Roberto Rodriguez (April 3, 1998), tells of a statue being erected in honour of Juan de Onate, a Spanish conquistador, in El Paso, Texas: "In response, many people are insisting that if it goes up, it shouldn't be done at taxpayers' expense and that it include the truth about Onate's role in the killing of hundreds of Acoma Pueblo Indians. Onate ordered that all Acoma men over 25 years old have their right foot cut off, and had women and children enslaved. As a reminder, native people recently cut off a foot from the Onate statue in Alcalde, N.M. Though the statue was repaired, educator Sofia Martinez said the foot should have stayed off: 'It would have caused people to ask why it's missing.' "

Alyssa Fisher writes of Civil War hero John M. Chivington, in a piece titled "A sight which can never be forgotten" (in Archaeology, Online Features, Sept. 16, 2003): "Not long after the massacre at Mountain Meadows came another savage attack, this time against a peaceful village of Cheyenne and Arapaho Indians living under Chief Black Kettle in southeastern Colorado Territory. Methodist preacher and Civil War hero Colonel John M. Chivington led approximately 700 volunteer soldiers almost 40 miles in harsh winter conditions from Fort Lyon to attack the community along Sand Creek. At dawn on Nov. 29, 1864, Chivington's men approached the camp and opened fire. The soldiers chased the unarmed families up the dry stream bed where they frantically dug into the sandy banks of the creek, seeking shelter. It was in these pits that most of them were slaughtered, unable to escape the militia's small arms fire and exploding howitzer shells.

"Despite Black Kettle's display of a white surrender flag and an American flag, the soldiers killed more than 150 Cheyenne and Arapaho, mostly women, children and elders. The attackers then dismembered many of the bodies and paraded limbs and scalps around Colorado. . . ."

The third colonial era example comes from closer to home. Halifax has a park named in honour of the much-admired Edward Cornwallis, British colonial governor from 1749 to 1752, with a large statue of him as a centrepiece. At an Oct. 1, 1749, meeting, he and his council undertook an attempt to exterminate the Mi'kmaq, indigenous to what are now Canada's Maritime provinces. To try to realize the genocidal goal, they issued a proclamation offering a bounty of 10 pounds (British money) for the scalps of the people, including women and children. On June 21, 1750, perhaps because the scalps were not coming in fast enough, they issued another proclamation, raising the bounty to 50 pounds.

Now, regarding today's standards, following are some of the horrendous crimes committed against humanity since I was born in 1938 - some are ongoing. Most of the world's leadership was, or is, directly or indirectly involved.

During the Second World War, upwards of 40 million people were killed, six million or so of whom were dispatched in a barbarous manner in gas chambers in concentration camps. Another several hundred thousand were vapourized by atomic bombs in Japan.

While the world sat on its hands, half of Cambodia's population was butchered.

The UN stood by and watched as close to a million people were savagely butchered in Rwanda.

One cannot leave out the crimes committed in the former Yugoslavia in the 1990s. In one instance, 7,500 men and boys were slaughtered while the leaders of NATO, the most awesomely powerful military force ever, permitted it to happen.

Now let's examine the horrendous poverty-related health conditions rampant in most countries of Africa. The horrific conditions could be quickly cured if the rich countries, which have enough food and medicine to accomplish it, had the compassion and generosity to do so. But because they've callously decided not to, millions are in various stages of starvation, and millions more are dying of AIDS.

In a particularly repulsive offshoot of this neglect, some orphanages in many African countries are designated only for children with AIDS. These orphanages are death houses because the operators can't afford the medicine to save the innocents. Lovely, modern standards, aren't they?

If the likes of barbarous colonial figures such as Onate and Cornwallis deserve statues to honour them, shouldn't modern barbarians such as Hitler have the same? Definitely NOT! If, in fact, we are going to build a better world, we must have standards that recognize that civilized society cannot honour barbarians of any stripe, historic or modern. Nova Scotia and Canada could make a good start in this direction by expunging Edward Cornwallis and Charles Lawrence from their honour rolls, and by becoming far more generous with aid to poorer countries. I offer no apologies!