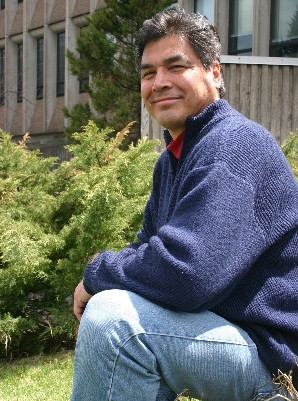 LEONARD PAUL, widely acclaimed naturalist painter, was born in September 1953 in Halifax, to Stella Paul and the late Noel Cope. He was the second of three siblings, including brother Vernon and sister Janice. They - and this is not as rare as many may think for Mi'kmaqs - were raised in the city, but their parents taught them to be proud of their heritage.

Paul attended Oxford Elementary and Junior High School. One of the most vivid memories he has of this experience is that he had to learn Latin. His question was: "For what purpose? No one spoke it." Then it was on to Saint Pat's High; it was still a Catholic school and boys and girls were segregated. He graduated in 1970 and then attended the Nova Scotia College of Art and Design, graduating in 1974. In the late 1980s, he returned to university and received a degree from Acadia in 1991. Although he is an art graduate, he still considers himself mainly self-taught.

His mother Stella describes the first evidence of his natural ability this way: "Before he was three, Leonard began to display a natural aptitude for drawing and painting. As he grew older, using an excellent imagination, he began to draw cartoon characters. He posted the results on the fridge and other places around the house."

My admiration for Leonard's work began to grow after I met and became friends with his mother in 1971 - we both began to work at the Nova Scotia district office of Indian Affairs that year. Stella often talked about him, and occasionally brought in samples of his work to show me. It caused me to believe that he had the potential to become a great artist.

This has proved to be the case. Since 1982, Leonard's work has been viewed and appreciated by thousands, including many dignitaries. Princess Anne of Great Britain opened an exhibition in Regina, Sask., where his work was displayed. Former Governor General Edward Schreyer participated in his national group shows in Ottawa on three occasions. On Nov. 1, 1983, the Canadian ambassador to the United Nations, Gerard Pelletier, opened an international group show at UN headquarters, New York, which included some of his work.

In the fall of 1996, Leonard was an artistic representative of Canada at a business trade show in Frankfurt, Germany. His artwork was selected by External Affairs and Aboriginal Business for display at the show. In 1992, The Atlantic Salmon Journal, an international angling magazine, published an extensive photo-documentary featuring Leonard. The article printed several snapshots of paintings of various river scenes taken from a number of Nova Scotia's rivers.

In 1991, Leonard received national exposure on television when he was selected to be one of the primary artists for a film produced by the National Film Board of Canada, entitled Kwa'nute. On May 3, 1993, recognized for his painting of environmental landscapes, Paul received the prestigious Governor General Medal.

To promote the celebration of Mi'kmaq Treaty Day in 1997 and 1998, the province of Nova Scotia commissioned Leonard to design and paint two paintings to be used on posters. During the summer of 1998 and into 1999, CBC TV aired highlights of his work as one of its themes for a unique project called Art Spots. And in 1998, Leonard submitted a watercolour, Too Close For Comfort, to a national art competition sponsored by Federal Ducks Unlimited, which was judged national winner. However, he is not limited to wildlife art; he is also an accomplished landscape and figure artist.

Leonard's painting style is high realism using a glazing technique, influenced by the 17th-century Dutch Baroque Period. He studied their glazing techniques at the Rijksmuseum, Mauritshuis Museum in Holland, and at the Louvre, Paris. He finished studying it in Berlin, Germany, and Washington. Although a master watercolourist, he is also well known for his detailed pencil drawings, and is fast becoming known for his luminous work in oils. Paul prefers painting idyllic landscapes and ornate powwow dancers in their full regalia.

Since he first started painting commercially in 1976, Leonard has had numerous national and international exhibitions. In 1996, he was listed in Canadian Who's Who for the arts. More recently, he was again nominated for the Governor General's Award.

Leonard says: "To name a few, I enjoy the writings of Robert Frost, Henry David Thoreau and William Wordsworth. Their writings helped me understand my emotions and how to interpret my feelings when I create. In a way, my father Noel was teaching pantheism whenever we went hunting or fishing. I felt peace and sensed order in nature. Thus, a landscape painting is a jumble of emotions that I convey on canvas, not just a pretty picture."

When not creating, Leonard enjoys teaching art to First Nations children, a responsibility he believes in. May the Great Spirit continue to guide his course!

Leonard can be contacted at: leonardfpaul@gmail.com