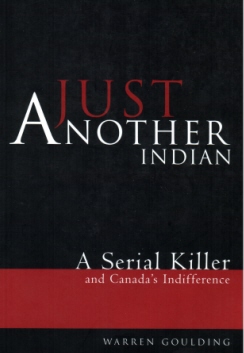 It seems "that any time a Native is murdered, it isn't a major case. Its just another dead Indian" - Justin English, sister of victim Mary Jane Serloin.

Just Another Indian (published April 1, 2001, by Fifth House Ltd, Calgary, Alberta) is a shocking must-read book that highlights systemic racism at its worst. Author Warren Goulding relates the horrendous deeds of a serial killer John Crawford, who targeted Native women because he concluded that brutalizing, raping and murdering them wouldn't cause any great public reaction in this country. How right he was!

Before proceeding, I'll first answer a question that's probably leapt to your mind: Who is John Crawford? If the media had done their job and treated it as a major case, you would already know because he would now be burdened with the reputation of being a devil. This quote from the publicity blurb that preceded the release of Goulding's book provides the answer starkly:

John Martin Crawford is a convicted serial killer. He preys on Native women.

"In Canada, only Clifford Olson has taken more lives than John Martin Crawford. Crawford's victims ranged in age from 16 to 35, and forensic evidence suggests that some of them were brutally assaulted and raped as well as murdered. His name should be as notorious as those of Olson or Charles Ng, but since his 1996 conviction, he has been serving his concurrent murder sentences in comfortable obscurity.

Journalist Warren Goulding draws Crawford, his victims, and the actions of the police and media out from obscurity and onto public record. He raises disturbing questions about racism, justice and social indifference as he traces the crimes, investigations, prosecutions, convictions, and media coverage surrounding Crawford and the women he killed. This book acknowledges...the lives and gruesome deaths of four Native women and challenges all Canadians to consider the possibility that in this country, some lives are worth more than others."

I commend Goulding for the excellent job he did in laying out for public examination how systemic racism is alive and well, and guides the actions of most Canadians, even the so-called "liberal media." - most of whom, after reading my assertion, are probably now reacting in indignant denial. Before they go too far in this direction, they should try this on.

At the time when Crawford was being tried and convicted, another horrendous murder case was being played out. The two perpetrators, Paul Bernardo and Karla Homulka, now rightly suffer the notoriety of inhuman barbarians for murdering and torturing two white girls. In comparison, the brutal torturer and murderer of four Native women is so anonymous that the vast majority of Canadians wouldn't know him if they fell over him. Need I say more?

Perhaps these comments made by trial judge Wright answer best why the national media all but ignored this horrendous case:

"What was it about these four victims that made Mr. Crawford feel that he could take their lives after sexually assaulting them, confining them, terrorizing them...?

And finally, what on earth can explain his actions in mutilating two of them? I refer to his conviction with respect to Ms. Serloin; she was left naked, the final indignity, on her back and exposed and mutilated by biting. Ms. Taysup's arm was cut off at the elbow, for what possible reason?

It appears to me that Mr. Crawford was attracted to his victims for four reasons: one, they were young; second, they were women; third, they were Native; and fourth, they were prostitutes... The accused treated them with contempt.... He seemed determined to destroy every vestige of their humanity. He left three of them naked and lying on the ground. There is a kind of ferocity in these actions that reminds me of a wild animal, a predator.

The accused has shown no remorse, absolutely none, no regrets, there's been no effort to explain his actions and, in fact, we know from the tapes that he laughed about the killings."

Sensational horrific stuff, isn't it? Thus, there is no rational conclusion that can be drawn from the media's indifference, other than that these women were viewed by them as only "Indians" and as such of no interest. Systemic racism at its worst.

Such behaviour explains why colonial Governor Edward Cornwallis, although its been amply proven that he indulged in genocide by trying to exterminate the Mi'kmaq, is still honoured by Nova Scotia and Canada. Can you imagine there being a statue of him in a public park or having a junior high School named after him, among other things, if he had tried to exterminate a white race? But, because he only tried to exterminate red people, its okay to continue to honour him. By doing so, society teaches its children to be racist.

The before-mentioned demonstrates that Canadians have a serious problem of systemic racist attitudes to deal with pertaining to First Nations Peoples. To see the relegation of the horrendous murders of our peoples, just because of their race, to a footnote in the obscure corners of the media is unforgivable. This is even more so when the offending society promotes itself as a bastion of tolerance!