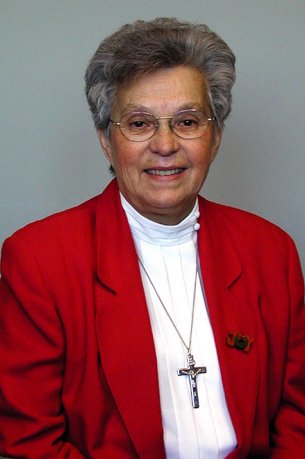 On October 13, 1933, Mary and Noel Moore of Membertou Reserve welcomed the arrival of the third borne of their seven children, a baby girl. Christened Dorothy, she was destined to become the first Nova Scotia Micmac to be inducted into a Roman Catholic religious order. But, before becoming a Nun, she would discover the trials of being born a Micmac in a hostile White society.

I'll set the stage for this tribute to Dorothy, by pointing out that she was born in an era where the majority of White Canadians still considered Natives to be racially inferior. Legally speaking, "Registered Indians" were still caught somewhere between being "Wards of the Crown" and having citizenship - their right to vote in Canada's elections was still 28 years down the road.

However, Natives across the country were beginning to stir and take up a non-violent struggle to achieve the same measure of civil and human rights as enjoyed by other Canadians. In adulthood, Sister Dorothy would join the struggle and come to be viewed as one of its most effective advocates. Her ability as an advocate was enhanced by her own experiences as a victim of racism - which also provided much of the material for many of her lectures on the subject. For instance, she delivered a lecture at Dalhousie University in 1988, entitled "Growing up in a Racist Environment."

In youth, Dorothy attended several diverse educational institutions. She first attended the Indian Day School at Membertou; then did a stint at the Indian Residential School at Shubenacadie - of which her memories are less than fond - then in 1949 she became the first Micmac to attend an off-reserve school in Sydney. This phase in her life ended at Sydney's Holy Angeles Convent in 1954.

That was also the year Dorothy made a lifetime commitment - she decided to dedicate her life to the service of God. In order to carry out her commitment, she would apply, and be accepted, as a Nun with the order of the Sisters of Saint Martha at Antigonish. This move was not received with jubilation by her father, a man who was very proud and protective of his cultural heritage; he felt it was alien to the values of the Micmac and that it would alienate her from the culture. Noel did not rigorously oppose Dorothy's vocation but, in his lifetime he never accepted it with open arms.

Advancing her educational dreams, Dorothy attended Teacher's College and graduated with a Teaching Certificate in 1958. She later attended classes at Saint Francis Xavier University and was awarded Bachelors of Arts and Education degrees in 1974. Then in 1984, she received her Masters of Education Degree from Mount Saint Vincent. I don't know if she has any ambitions to someday go for a Doctorate but, knowing her determination and tenacity, if she goes for it, there is no doubt in my mind that one day we will be calling her Doctor Sister Dorothy Moore!

Between 1958 and 1972, Sister taught Elementary school courses in such diverse places as Sampsonville, Nova Scotia and Picture Butte, Alberta. During her three year stint at Picture Butte, she was also the basketball coach. In 1974, Dorothy began teaching at the Federal Elementary Junior School in Eskasoni; she would rise to the position of principal by 1980.

After being awarded her Masters degree, Sister applied for and subsequently was appointed Native Studies Counsellor at the University College of Cape Breton. In 1992, she became the University's Director of Mi'kmaq Student Services. Today, she is employed by the Department of Education as Native Consultant.

During this time, Dorothy became involved with the movement to find equality and justice for the oppressed in Nova Scotia. Although her emphasis would be directed towards overcoming the Micmac's racial problems with society, she shares with me a belief in this principle: To labour for the rights of only one discriminated against group is an exercise in futility. Only by working together can we find a way, if not to end intolerance completely, to at least reduce it to a minor problem in our society!

In promoting the Micmac drive for social equality, Dorothy has been involved in many activities, organizing anti-racism forms to setting as a board member on the Nova Scotia Human Rights Commission.

Regrettably, the struggle for equality and justice for Natives in Canada is yet a long way from being won. However, notable progress has been made and my good friend Sister Dorothy Moore's major contribution to this end is gratefully acknowledged and appreciated!