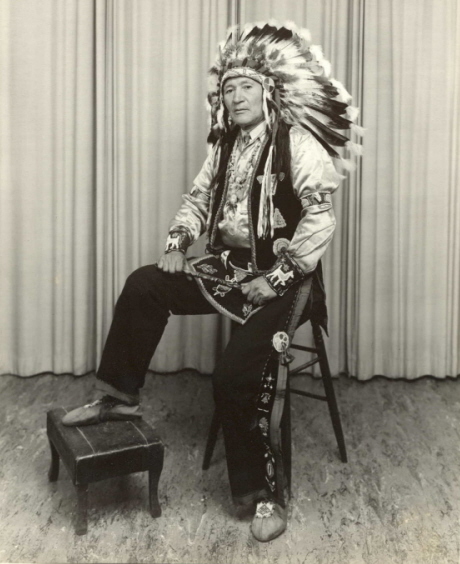 Chief Ben Christmas: A Centennial salute to a hero

Benjamin Edmond was born to Chief Joseph and Madeline Christmas (Richards) at Port Morien, Cape Breton, on July 14, 1896. His early years were divided between living on-Reserve at King's Road in Sydney and Port Morien.

After the Exchequer Court, at the request of the Band's white neighbours, recommended to the federal government in the early 1900s that it sell the King's Road reserve, which it agreed to do, the Band members were relocated to Membertou Reserve. Membertou is where Ben and wife, Jane, reared their 12 children.

A devote Roman Catholic, Ben was deeply involved in the religious life of the Mi'kmaq Nation. He played a key role in Mi'kmaq Grand Council activities and was renowned as a prayer and choir leader at church services, wakes, etc. However, it was in the field of politics where he left a legacy of major achievement.

In 1919, at the age of 23, Ben became Chief of his community - an office he held for 40 years. He also held many other offices simultaneously during his lifetime, and for a short time he was president of the North American Indian Brotherhood.

Where I came to admire Ben's vision and work was when I was reading and analyzing documents collected from various archives for writing a section of We Were Not the Savages, which recounts the Mi'kmaq experience with the government's "centralization" plan. What struck me most was how quickly Ben grasped the fact that the government's plan to centralize all of the Province's Mi'kmaq into two locations, Eskasoni and Shubenacadie, was meant to sound the death knell for Mi'kmaq culture.

This conclusion on his part was accurate. Indian Affairs correspondence on the matter lays out how, by integration and assimilation, it intended to find a "final solution" for its "Indian Problem" in Nova Scotia.

To get centralization off the ground, the government had its representatives, who knew that the intent was the opposite, enlist the support of many Mi'kmaq leaders by promoting the plan among them as a means to enhance and strengthen their culture - with a vastly improved standard of living thrown in as a bonus.

In the face of the support given the "plan" by the majority of his peers, Ben, who was also the president of the United General Indian Council of Nova Scotia, in concert with the efforts of such vocal individuals as Chief Joseph Julien of Millbrook, Noel Marshall of Chapel Island, Margaret Phillips of Cole Harbour, etc. took up the battle and openly opposed it for what it was, an attempt by Canada to commit cultural genocide.

This is where I can sympathize with Chief Ben and friends because I've had several personal experiences in somewhat similar situations. Opposing something promoted by Indian Affairs, which opposition you can support by personal knowledge of the past catastrophes caused by similar Indian Affairs activities, can get you ostracized by your peers in your own community.

However, by 1946 the majority of Mi'kmaq had concluded that the opponents of the "plan" were right. We, their survivors, owe a great debt to all the brave souls who had the courage, in spite of peer pressure to the contrary, to join with Ben at the outset in opposing centralization.

Here are a few examples of the scope of the racism Ben and friends had to contend with while opposing centralization:

An Indian Affairs welfare director responding to an MPs inquiry about the delay in removing the Mi'kmaq from the Antigonish area: (centralizing the Mi'kmaq)

"It was felt that we would also improve the amenities of the White communities which are not improved by the immediate presence of isolated groups of Indians."

Ben would have been amused by this appraisal of his intelligence by the Indian Agent at Eskasoni in a memo dated March 1, 1943:

"It appears that Ben Christmas, an Indian of Membertou Reserve, Sydney, NS, who is considered to be somewhat more intelligent than the ordinary Indian. . ." [Mr. MacLean obviously had a low opinion about the intelligence of Native Americans and was amazed Mr. Christmas could rise above this standard.]

He continued: "I have been asked to inform you that no notice should be taken of letters from Mr. Christmas regarding the centralization plan, or from others who may write in this regard, as regardless of whose name may be used as a signature, Mr. Christmas is the man behind the gun."

If its attempt to kill off Mi'kmaq culture had been successful, the Canadian government would have been guilty of a form of genocide outlawed by the United Nations. However, it was not successful and the "plan" died a timely death in 1950. Accolades go to the memory of Chief Christmas, a man who had the courage to lay his reputation on the line in fighting for the survival of his Nation's culture. Without Ben's courage, dedication, and leadership, Mi'kmaq culture in Nova Scotia might have, because of the negative effects of centralization, disappeared.

To the end Ben served his people well. At the age of 70 he was a member of the Indian Advisory Council and he died while attending a council meeting in Amherst in 1966. Ben's work, dedicated to the survival of his Nation, deserves to be remembered as the unselfish efforts of a hero!