A lifelong friend, Elsie Basque nee Charles - born to Margaret Labrador and Joe Charles at Hectanooga, Digby County, on May 12, 1916 - was the first Mi'kmaw to earn a teacher's certificate from the Provincial Normal College in Truro.

How did a Mi'kmaw manage to become a teacher during these racist times? The explanation is simple. Raised among the Acadian people, Elsie did not experience, in youth, the self-confidence-destroying racial discrimination that was suffered by most Nova Scotia Mi'kmaq. Here is how she describes it: "I grew up in the area of Nova Scotia known as Clare... An area where one is accepted for who and what one is - not one's ethnic background. The bonds of friendship and understanding that began with Chief Membertou, Champlain, De Monts, Poutrincourt, have never faltered; their legacy lives on."

However, these early years for her were not without tears and tragedy. By the end of her third year, Joe had been hospitalized with tuberculosis and Margaret had left the family permanently. But things got better. In 1922, Joe's TB stabilized, and life at home in Hectanooga returned to a peaceful existence.

Elsie remembers "papa" as being her most important childhood influence. His admonishment "to be somebody, one needs a good education" is still fondly recalled. In tune with this belief, Joe enrolled her in the old one-room school in Hectanooga, where grade 8 was completed. Then, after reading an article in the 1929 issue of the Halifax Chronicle, which touted the fields being opened up for Mi'kmaq by the opening of the Shubenacadie "Indian Residential School," Joe, thinking that this was a golden opportunity to secure his daughter's future educational requirements, enrolled her.

Here is her assessment of those two years and of the school: "I've always regarded these years as time wasted... I was in the 8th grade when I arrived at the school in February 1930, and in the 8th grade when I left in 1932. What had I learned in those 28 months? How to darn a sock, sew a straight seam on the sewing machine, and how to scrub clothes on a wash board. Educationally -how to parse and analyze a sentence."

"Volumes Have been written about the school. Its total disastrous effect upon the Mi'kmaw/Maliseet Nations will never be known. Generations later, the scars remain. It was not an education institution as we define education. Older children, boys and girls, were taken out of the classroom to do chores: i.e., milk the cows, clean the barn, plant and harvest, etc. The girls were ordered to launder the clothes, make uniforms, scrub the floors, and so on."

After Shubenacadie, Elsie, who is fully fluent in French, returned to Clare and attended Meteghan's Sacred Heart Academy, from which she graduated with a high school diploma in 1936. She then entered classes at the Provincial Normal College in Truro and was awarded a teachers certificate in 1937. Notably, she was well treated at the college by both peers and administration. The students elected her class president, and she describes the year as a "fun year." The school's principal, Dr. Davis, each year permitted exceptional students to use his name as a reference; in 1937, only three were permitted to do so - Elsie was one of them!

With teaching licence in hand, Elsie applied by mail in mid-1937 to the Inverness County school inspector for a teaching job at Mabou Ridge. This is how she describes her first face-to-face meeting with the inspector -- it was also her first experience with overt racism: "On our short drive to his home in Port Hastings, he advised that it would be best for me to turn around and go home. He was certain that the good people of Mabou Ridge would never accept a Mi'kmaw to teach their children. After much discussion it was agreed that I could at least try." The next day, teaching duties were undertaken without opposition from the community; the year passed without incident. In the mid 1980s, Elsie returned to Mabou Ridge and was given a warm welcome.

In 1939, Elsie began teaching Mi'kmaq children at the newly reopened Indian Day School in Indian Brook. She taught at the one-room school until 1947, when a modern school was opened and Indian Affairs hired the Sisters of Charity to take over the teaching.

Marriage to Isaac Basque, a fine, hard-working and generous gentleman from Indian Brook, was her highlight for 1941. The couple had four children: three were born at Indian Brook; the fourth was born in Boston, where the family had moved in 1951. In 1975, Elsie returned to work as a teacher with the Boston Indian Council. She became deeply involved in the council's anti-racism activities and was widely recognized for her efforts.

While teaching at Indian Brook, "Mrs. Basque" influenced the lives of 48 children. In 1993, many of the surviving members of that group joined with her at Indian Brook for a sentimental reunion and celebration. She describes the reunion as "the most heart-warming experience of my life." 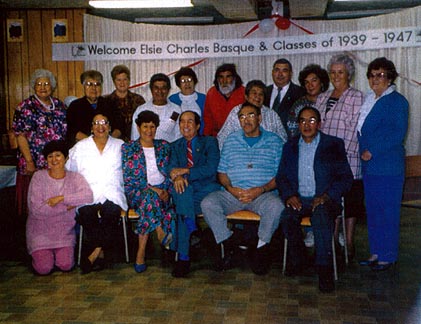 After retirement, the Basques returned to Nova Scotia in 1984 to live out their golden years in her beloved Clare at Saulnierville. Will, her oldest child, and family reside at Eskasoni; her daughter Marty and family reside in nearby Meteghan. Tragically, two children passed away early in life, Isaac passed away in 1987.

The fight for justice for our people goes on. With the example set by such pioneers as Mrs. Basque, how can we not but overcome?