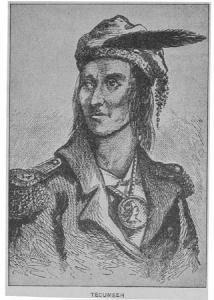 "When you arise in the morning, give thanks to the morning light for your life and strength. Give thanks for your food and the joy of living. If you see no reason for giving thanks, the fault lies in yourself." *Tecumseh*

Tecumseh, fought against United States expansion into the Midwest in the early 19th century. Born in what is now Ohio, he was the son of a Shawnee chief who was killed fighting white settlers in the Battle of Point Pleasant (1774). In 1794 Tecumseh took part in the Battle of Fallen Timbers, in which a coalition of tribes was defeated by the U.S. general Anthony Wayne.

Tecumseh became known for his opposition to any surrender of Native American land to whites, holding that a cession of land by any one tribe was illegal without the consent of all the others. He and his brother Tenskwatawa, a religious visionary known as The Prophet, preached against Native American adoption of white customsespecially the use of liquor.

In 1808 they were forced out of Ohio and moved to Indiana, where they tried to form a broad alliance of Native American tribes with help from the British in Canada. Their plans were thwarted when Tenskwatawa was defeated by U.S. forces under William Henry Harrison at the Battle of Tippecanoe in 1811. Tecumseh fought on the British side in the War of 1812 and was killed in the Battle of the Thames, near Thamesville, Ontario, on October 5, 1813.