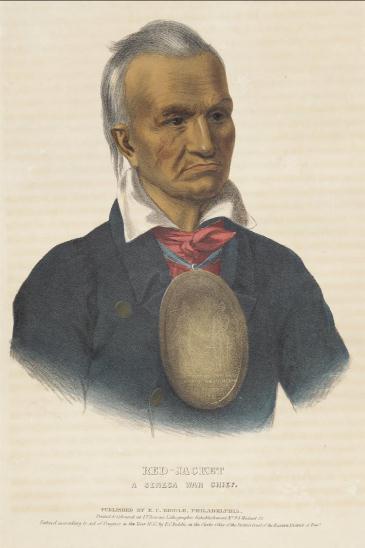 Red Jacket was born in 1750 in upper New York State near Canoga, Seneca County, New York. His father was a Cayuga. His mother was a Seneca of the Wolf Clan. At age 10, he was given the name Otetiani or "always ready." At manhood, he was called Sagoyewatha (Sa-Go-Ye-Wat-Ha) which means "he keeps them awake," and he became chief of the Seneca tribe. Red Jacket was a Pine Tree chief who outshone the hereditary chiefs and he dominated tribal and village society.

As a reformed drunkard, Red Jacket advocated social harmony through temperance. The name "Red Jacket" was given to him by the British soldiers who gave him a "red coat," when he fought with the British against the colonies. Red Jacket had a great intellect and was a great orator.

In a discourse about Amerindian tolerance for the differences of others, Ronald Wright, in "Stolen Continents", relates Seneca Chief Red Jacket's response to the efforts of a White preacher to convert his people to Christianity:

"In a scene reminiscent of the debate between Franciscans and Aztec priests nearly 300 hundred years before, the formidable Red Jacket rose to reply. His answer is one of the best ever given to Christianity's claims. Which mentality, he makes one wonder, is the more primitive: that which believes itself to have a patent on truth or that which pleads for cultural diversity, for tolerance, for mutual respect?"

"Brother ... listen to what we say. There was a time when our forefathers owned this great island. Their seats extended from the rising to the setting sun. The Great Spirit had made it for the use of Indians. He had created the buffalo, the deer, and other animals for food. He had made the bear and the beaver. Their skins served us for clothing. He had scattered them over the country, and taught us how to take them. He had caused the earth to produce corn for bread.... If we had some disputes about our hunting ground, they were generally settled without the shedding of much blood. But an evil day came upon us. Your forefathers crossed the great water and landed on this island. Their numbers were small. They found friends and not enemies. They told us they had fled from their own country for fear of wicked men, and had come here to enjoy their religion. They asked for a small seat. We took pity on them, granted their request; and they sat down amongst us. We gave them corn and meat; they gave us poison in return.

"The white people, Brother, had now found our country. Tidings were carried back, and more came amongst us. Yet we did not fear them. We took them to be friends. They called us brothers. We believed them, and gave them a larger seat. At length their numbers had greatly increased. They wanted more land; they wanted our country. Our eyes were opened, and our minds became uneasy. Wars took place. Indians were hired to fight against Indians, and many of our people were destroyed. They also brought liquor amongst us. It was strong and powerful, and has slain thousands.

"Brother, our seats were once large and yours were small. You have now become a great people, and we have scarcely a place left to spread our blankets. You have got our country, but are not satisfied; you want to force your religion upon us.

"Brother, continue to listen. You say that you are sent to instruct us how to worship the Great Spirit agreeably to his mind, and, if we do not take hold of the religion which you white people teach, we shall be unhappy hereafter. You say that you are right and we are lost. How do we know this to be true? We ... only know what you tell us about it. How shall we know when to believe, being so often deceived by the white people?

"Brother, we do not understand these things. We are told that your religion was given to your forefathers, and has been handed down from father to son. We also have a religion, which was given to our forefathers, and has been handed down to us, their children. We worship in that way. It teaches us to be thankful for all the favours we receive; to love each other, and to be united. We never quarrel about religion.

"Brother, we do not wish to destroy your religion, or take it from you. We only want to enjoy our own."

The tolerance shown by Chief Red Jacket for different views was also a trait deeply imbedded in Mi'kmaq society. It was well reflected in the method the Nation had devised to resolve disputes, whereby disputing parties were brought together for mediation and reconciliation by community members, who would then assist them to reach an agreement based on justice and fairness. When struck, the final agreement would address all major concerns of the individuals, groups or governments involved. After the opposing parties accepted an agreement, it was understood, and supported by the will of the people, that they would live by its provisions.