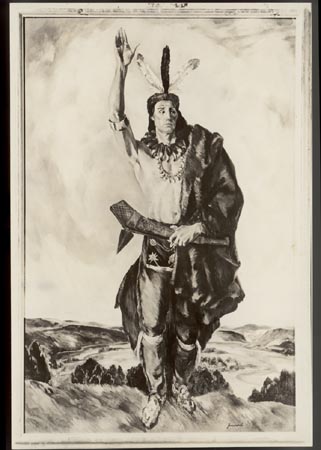 Pontiac, born on the Maumee River, was the son of an Ottawa father and an Ojibway mother. By 1765 he had become a chief with great power of organization. He traveled widely urging the Indians to organize and remove the Europeans, he likely fought against Braddock in 1755. With his Ottawas, Ojibways and Pottawaton, he formed his conspiracy to overthrow the English rule by taking their forts. He almost successed. Forts Michellimackinac, Sandusky, Miami, Ouitanon, Presque Isle, LeBouef and Venango fell and many people were massacred. Forts Pitt, Niagara, Ligonier and Detroit held out and Pontiac's plan collapsed. He was pardoned by the English.

In fear that he was about to organize further hostilities among the Illinois Indians, he was stabbed to death by a Kaskaskia tribesman at Cahokia. In retaliations, the Potawatanis practically exterminated the Illinois.

Pontiac achieved his fame by his powerful organizing ability and by his six months siege of Fort Detroit. An Ojibwa girl told Major Gladwyn, Commander of the fort, of a strategy to be used by the Indians to get into the fort and take it.

The English were ready and Pontiac failed. He was one of the most remarkable men of his race in American history.

"If you are French....join us. If you are English, we declare war against you. Let us have your answer."

He said this after the end of the French and Indian War and before his attacks.

Chief Pontiac was born circa 1720. His father was a member of the Ottawa Indians, and his mother was Chippewa. His family raised Pontiac as an Ottawa, although he had numerous friends among his mother's people. Little is known of his early years. He probably traded with the French merchants that moved into modern-day Michigan and the Ohio Country in the late 1600s and 1700s. By 1755, he had become a chief of the Ottawas.

Pontiac subscribed to the religious beliefs of Neolin, a prophet among the Delaware Indians during the 1760s. Neolin encouraged his fellow Indians to forsake all English goods and customs. He felt that the natives' dependence on these items had infuriated their gods. The reason why the Native Americans in the Ohio Country currently suffered at the hands of the English was because they had forgotten the true ways of their people. European ways would condemn the Indians to the natives' equivalent of hell. Indians had to separate from white ways, not become dependent on them. Interestingly, although Neolin urged the natives to reject all European customs, missionaries from the Moravian Church heavily influenced his views of the Great Spirit.

Pontiac concurred with Neolin's views but also felt the Native Americans had to remain militarily strong to drive the Europeans out of the Ohio Country. This became especially important with the French Indian War's conclusion in 1763. The Treaty Of Paris (1763) turned all French lands in North America over to the English. Natives feared the loss of their traditional ally and also believed that British settlers would flood the Ohio Country. To prevent the incursion of whites, Pontiac and the Ottawas encouraged Ohio Country natives to rise up en masse in 1763. The Ottawas attacked Fort Detroit in May 1763. Most people view this as the beginning of Pontiac's Rebellion. The Shawnee Indians, the Munsee Indians, the Wyandot Indians, the Seneca Indians, and the Indians also raided English settlements in the Ohio Country and in western Pennsylvania during 1763. In the autumn of 1764, the English military took the offensive against the natives. Colonel John Bradstreet and Colonel Bouquet each launched invasions of the Ohio Country from Pennsylvania. Both men easily subdued the native population.

In essence, Pontiac's Rebellion ended in the autumn of 1764, but Pontiac did not formally surrender to the English until July 1766. The English promised him no harm as long as he agreed never to wage war against the British again. Pontiac spent the remainder of his life with his family on the banks of the Maumee River. In 1769, a fellow Native American murdered Pontiac. The English may have paid the man to kill Pontiac to deprive the Ottawas of one of their leaders. It may also have been a group of Native Americans who were upset with Pontiac's refusal to war against the English. Pontiac's death, like most of his life, remains a mystery. His dream of a united Native American front against the Europeans did not end with him, however. Other native leaders, such as Tecumseh and Little Turtle, would also try to form Indian confederations to stop the westward expansion of white settlers in the late 1700s and early 1800s.