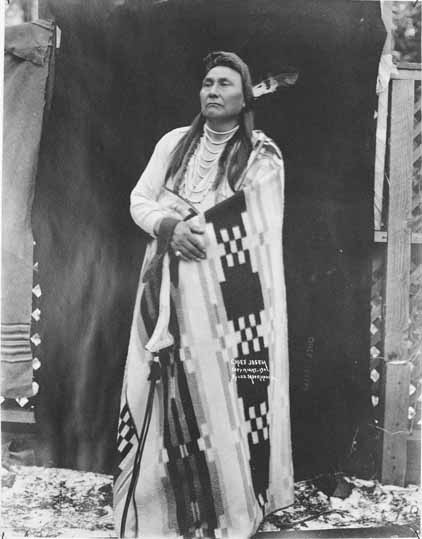 Chief Joseph, known by his people as In-mut-too-yah-lat-lat (Thunder coming up over the land from the water), was best known for his resistance to the U.S. Government's attempts to force his tribe onto reservations. The Nez Perce were a peaceful nation spread from Idaho to Northern Washington. The tribe had maintained good relations with the whites after the Lewis and Clark expedition. Joseph spent much of his early childhood at a mission maintained by Christian missionaries.

In 1855 Chief Joseph's father, Old Joseph, signed a treaty with the U.S. that allowed his people to retain much of their traditional lands. In 1863 another treaty was created that severely reduced the amount of land, but Old Joseph maintained that this second treaty was never agreed to by his people. A showdown over the second "non-treaty" came after Chief Joseph assumed his role as Chief in 1877. After months of fighting and forced marches, many of the Nez Perce were sent to a reservation in what is now Oklahoma, where many died from malaria and starvation. Chief Joseph tried every possible appeal to the federal authorities to return the Nez Perce to the land of their ancestors. In 1885, he was sent along with many of his band to a reservation in Washington where, according to the reservation doctor, he later died of a broken heart.

"I have carried a heavy load on my back ever since I was a boy. I realized then that we could not hold our own with the white men. We were like deer. They were like grizzly bears. We had small country. Their country was large. We were contented to let things remain as the Great Spirit Chief made them. They were not, and would change the rivers and mountains if they did not suit them. "

"I am tired of fighting.... from where the sun now stands, I will fight no more. "

"Our fathers gave us many laws, which they had learned from their fathers. These laws were good. They told us to treat all people as they treated us; that we should never be the first to break a bargain; that is was a disgrace to tell a lie; that we should speak only the truth; that it was a shame for one man to take another his wife or his property without paying for it. "

"We were contented to let things remain as the Great Spirit made them. "

"Suppose a white man should come to me and say, Joseph, I like your horses. I want to buy them. I say to him, No, my horses suit me; I will not sell them. Then he goes to my neighbor and says, Pay me money, and I will sell you Josephs horses. The white man returns to me and says, Joseph, I have bought your horses and you must let me have them. If we sold our lands to the government, this is the way they bought them. "

"If the white man wants to live in peace with the Indian, he can live in peace. Treat all men alike. Give them a chance to live and grow. "

"All men were made brothers. The earth is the mother of all people, and all people should have equal rights upon it. You might as well expect the rivers to run backward as that any man who was born free should be contented when penned up and denied liberty to go where he pleases."

"If you tie a horse to a stake, do you expect him to grow fat? If you pen an Indian up on a small spot of earth, and compel him to stay there, he will not be contented, nor will he grow and prosper."

"The earth and myself are of one mind. "

"I am tired of talk that comes to nothing It makes my heart sick when I remember all the good words and all the broken promises. There has been too much talking by men who had no right to talk."

"It does not require many words to speak the truth."

"We do not want churches because they will teach us to quarrel about God, as the Catholics and Protestants do. We do not want that."

"We may quarrel with men about things on earth, but we never quarrel about the Great Spirit."

"I believe much trouble and blood would be saved if we opened our hearts more. I will tell you in my way how the Indian sees things. The white man has more words to tell you how they look to him, but is does not require many words to seek the truth."

"Too many misinterpretations have been made... too many misunderstandings..."

"The Great Spirit Chief who rules above all will smile upon this land... and this time the Indian race is waiting and praying."

"I am tired of talk that comes to nothing."

The surrender speech of Chief Joseph has become perhaps the most famous statement in American Indian history:

"Tell General Howard I know his heart. What he told me before, I have it in my heart. I am tired of fighting. Our Chiefs are killed; Looking Glass is dead, Ta Hool Hool Shute is dead. The old men are all dead. It is the young men who say yes or no. He who led on the young men is dead. It is cold, and we have no blankets; the little children are freezing to death. My people, some of them, have run away to the hills, and have no blankets, no food. No one knows where they are - perhaps freezing to death. I want to have time to look for my children, and see how many of them I can find. Maybe I shall find them among the dead. Hear me, my Chiefs! I am tired; my heart is sick and sad. From where the sun now stands I will fight no more forever. " 1877

This speech came at the conclusion of a remarkable effort by the Nez Percéé tribe to escape to Canada in 1877. They had traveled a circuitous route of about fifteen hundred miles and had nearly reached their destination before being forced to surrender just south of the Canadian border. Most historians believe that Joseph's role in the retreat has been exaggerated; he was only one of several leaders. Nonetheless he remains an enduring symbol of Indian resistance.

A reluctant general in an extraordinary campaign, Joseph belonged to a group victimized by a familiar series of events. The Nez Percéé reservation had been greatly reduced in size after the discovery of gold in eastern Oregon. Although the Nez Percéés had not agreed to the loss of their lands, the government insisted they be confined within the new boundaries. When young Nez Percéés along the Salmon River killed people they deemed intruders, they knew retribution would come. Their tribe first hid them and then decided to flee.

Joseph at this time was in his late thirties; he had succeeded his father as chief in 1871. A tall, dignified man, he had appeared well suited to lead in times of peace, but the times now demanded a different role. He and other Nez Percéé men waged a series of battles during the summer of 1877. Making their way through the mountainous terrain of Idaho, Wyoming, and Montana, they frustrated the efforts of the U.S. Army to capture them.

The Nez Percéés crossed the Missouri River in northern Montana on September 23. Soon thereafter, thinking they had outlasted and outwitted their pursuers, they stopped to rest in the vicinity of the Bear Paw Mountains, about forty miles south of the Canadian border. With no bluecoats in sight and suffering from hunger and exhaustion, they prepared for the final push into Canada. But there they were surprised by Gen. Nelson Miles on September 30. On October 5 they ended what had already become a famous flight.

Joseph had been assured that the Nez Percéés would be permitted to return to their home country in the Wallowa Valley in eastern Oregon. But political pressure from the Northwest dictated another fate: exile to far-off Indian Territory (now Oklahoma). In 1885 some of the Nez Percéés were allowed to move to the Lapwai Reservation in Idaho, not far from the Wallowa Valley, but Joseph and others were sent to the Colville Reservation in northeastern Washington.

For the remainder of his life, Joseph tried unsuccessfully to convince federal authorities that he and others from his tribe should regain a place in the valley "where most of my relatives and friends are sleeping their last sleep." But he died at Colville and was buried there. In 1905 a monument was erected in his honor at Nespelem on the reservation. On that occasion, a Nez Percéé, Yellow Bull, rode Joseph's horse and spoke about him while on horseback. "Joseph is dead," the old man said, "but his words will live forever."

Alvin M. Josephy, Jr., The Nez Percéé Indians and the Opening of the Northwest (1965).

NATIVE AMERICANS, WEAPONS OF MASS DESTRUCTION USED AGAINST THEM, The Weapon of Education

Its amazing how white supremacist thought, when it came to First Nations Peoples, was so similar in Canada and the States. For proof, keep in mind this short story about Chief Joseph and the following history highlight about Chief Sitting Bull as you progress through the Website and you will be hard pressed to find much difference in attitudes toward Native Americans between the Canadian Department of Indian Affairs and the American Bureau of Indian Affairs. Identical twins would be an apt description.

"Kill the Indian and save the man." Richard Henry Pratt. The following conversation was recorded in the late 1800s between Chief Joseph of the Nez Perce tribe and one of the government commissioners who was trying to convince Chief Joseph of the advantages of having a government funded school located on the agency.

What the Native Americans wanted was the ability to teach their own children their own ways without government interference. Not only was the government wanting to control their lands, their food and their belongings, but they wanted to change the lifestyles of the "savages" so they would be "civilized" like the white man.