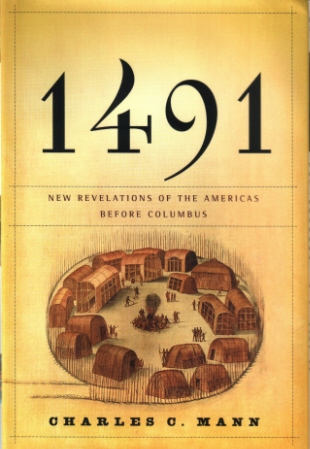 When Christopher Columbus first sit foot on land in the Americas he was walking on a small portion of the soil of two continents that a multitude of viable American Indian civilizations called home. The cities, towns, and rural areas of these civilizations were populated with tens of millions of people. Among their populations were astrologers, mathematicians, biologists, historians, medical professionals, farmers, hunters, fishermen, traders, metal workers, artists, and so on.

During a November 2005 Email exchange with an award winning American journalist and author, Charles C. Mann, in reference to getting his permission to use a New York Times opinion he had written, we agreed to exchange copies of our books. Thus, for an autographed copy of We Were Not the Savages, I acquired an autographed copy of "1491", his recently published overview of the pre-Columbian civilizations of the Americas. 1491 is, to put it mildly, an eye-opener.

The educational worth of Mann's book pops up almost immediately because he, as many other Caucasian historical writers are now doing when penning the histories of the Americas, leaves behind any Euro-centric inhibitions he may harbour and sticks to the truth. Which some Caucasians brand, revisionism. However, as he has quoted from reliable documents, used impeccable visual resources, and the opinions of well qualified professional historians, anthropologists, etc, it will be almost impossible for them to make believable rebuttals.

The following are a sample of the books content, my commentary is in brackets:

(Many American Indian urban dwellers lived in cities and towns that had running water, sewage systems, and other amenities that were not then known in Europe)

Tenochtitlán dazzled its invaders-it was bigger than Paris, Europes greatest metropolis. The Spaniards gawped like yokels at the wide streets, ornately carved buildings, and markets bright with goods from hundreds of miles away...Long aqueducts conveyed water from the distant mountains...into the city. Even more astounding than the great temples and immense banners and colorful promenades were the botanical gardensnone existed in Europe. The same novelty attended the force of a thousand men that kept the crowded streets immaculate. (Streets that werent ankle-deep in sewage! The conquistadores had never conceived of such a thing.)

(There is a possibility that an ancient American Indian city may be the worlds oldest) If...Aspero turns out to be substantially older than now thought, it might win the title of the worlds oldest citythe place where human civilization began. (Maybe we might actually stop people calling it the New World,  Moseley joked.

the Mexican National Museum of Culture claimed in a 1982 exhibition that maize was not domesticated, but created almost from scratch.

(This claim is echoed by modern scientists, who despite decades of effort have been unable to unravel the mystery of its birth -- they cannot figure out how American Indians did it!)

(In his tome Mann takes the reader to visit functioning and progressive American Indian civilizations that once thrived in Central, North and South America. Some of these, such as the Triple Alliance ( miscalled the Aztec), had some very barbaric practices that Caucasians often bring forward to try to prove that all American Indians were barbaric. The Author demolishes this saintly attitude with the following.)

.... There was but one method for obtaining this life-energy: ritual human sacrifice. To obtain the victims, Tlacaélel said (according to one of Sahagúns contemporaries), the sun needed a marketplace where he could go with his army [that is, the army of the Triple Alliance] to buy victims, men for him to eat. . . . And this will be a good thing, for it will be as if he had his maize cakes hot from the griddletortillas from a nearby place, hot and ready to eat whenever he wishes them. Occasionally the victims were slaves and criminals, but mainly they were prisoners of war. In this way the sacred mission of the Triple Alliance became translated into a secular mission: to obtain prisoners to sacrifice for the sun, the Alliance had to take over the world. In Tlacaélels scheme, imperial conquests were key to the moral combat against evil, explained Miguel León-Portilla, a Mexican anthropologist who has devoted much of his career to analyzing Mexica thought. The survival of the universe depended on them.

Human sacrifice is such a charged subject that its practice by the Triple Alliance has inevitably become shrouded in myths. Two are important here. The first is that human sacrifice was never practicedthe many post conquest accounts of public death-spectacles are all racist lies. It was indeed in the Spanish interest to exaggerate the extent of human sacrifice, because ending what Cortés called this most horrid and abominable custom became a post hoc rationale for conquest. But the many vividly depicted ceremonies in Mexica art and writing leave little doubt that it occurredand on a large scale. (Cortés may well have been correct when he estimated that sacrifice claimed three or four thousand souls a year.)

The second myth is that in its penchant for public slaughter the Triple Alliance was fundamentally different from Europe. Criminals beheaded in Palermo, heretics burned alive in Toledo, assassins drawn and quartered in ParisEuropeans flocked to every form of painful death imaginable, free entertainment that drew huge crowds. London, the historian Fernand Braudel tells us, held public executions eight times a year at Tyburn, just north of Hyde Park. (The diplomat Samuel Pepys paid a shilling for a good view of a Tyburn hanging in 1664; watching the victim beg for mercy, he wrote, was a crowd of at least 12 or 14,000 people.) In most if not all European nations, the bodies were impaled on city walls and strung along highways as warnings. The corpses dangling from trees whose distant silhouettes stand out against the sky, in so many old paintings, are merely a realistic detail, Braudel observed. They were part of the landscape. Between 1530 and 1630, according to Cambridge historian V. A. C. Gatrell, England executed seventy-five thousand people. At the time, its population was about three million, perhaps a tenth that of the Mexica empire. Arithmetic suggests that if England had been the size of the Triple Alliance, it would have executed, on average, about 7,500 people per year, roughly twice the number Cortés estimated for the empire. France and Spain were still more bloodthirsty than England, according to Braudel.

In their penchant for ceremonial public slaughter, the Alliance and Europe were more alike than either side grasped. In both places the public death was accompanied by the reading of ritual scripts. And in both the goal was to create a cathartic paroxysm of loyalty to the governmentin the Mexica case, by recalling the spiritual justification for the empire; in the European case, to reassert the sovereigns divine power after it had been injured by a criminal act. Most important, neither society should be judgedor in the event judged each otherentirely by its brutality. Who today would want to live in the Greece of Plato and Socrates, with its slavery, constant warfare, institutionalized pederasty, and relentless culling of surplus population? Yet Athens had a coruscating tradition of rhetoric, lyric drama, and philosophy. So did Tenochtitlán and the other cities in the Triple Alliance. In fact, the corpus of writings in classical Nahuatl, the language of the Alliance, is even larger than the corpus of texts in classical Greek....

A must read! Its contents will make you wonder why pre-Columbian American Indian history isnt taught in our schools, instead of the histories of foreign continents.