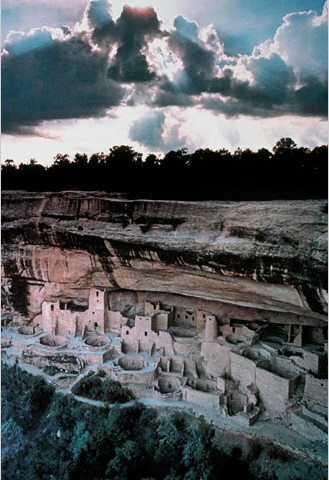 Mesa Verde, southwest Colorado, was one of the settlements of the Anasazi
("Mesa verde" is "green table" in Spanish.)
The Anasazi first arrived in the sixth century A.D
The remains of their buildings can still be seen on and around the mesa. 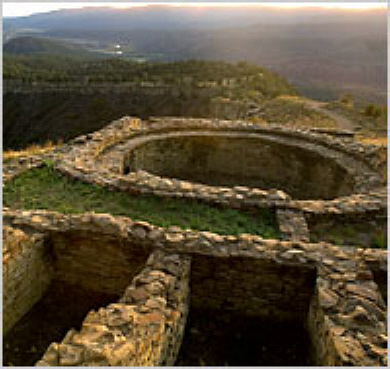 The remains of a kiva, above, an Anasazi ceremonial chamber in southern Colorado

History: The Anasazi were located in the Four Corners region ( Northern New Mexico west of the Pecos River, southwestern Colorado, most of southern Utah, and northern Arizona south to the Little Colorado River). The Anasazi existed around two thousand years ago and are thought to be the ancestors of modern Indian tribes like the Hopi, the Zuni and the Pueblo. The earliest Anasazi probably settled in the plateau area because water was more available. They settled into three distinct population centers which were Chaco Canyon, Mesa Verde, and Kayenta and eventually spread out across the entire plateau. The Anasazi tradition can be divided into two parts: the Basket Makers and the Pueblo.

Paleo-Indian and Archaic people hunted and foraged in the canyon. Semi-permanent hunter-gatherers began cultivating squash and corn in the first millennium. Finally in AD 490, the first permanent villages were established due to an increase in annual rainfall. Around AD 1050, the communities of Chaco Canyon were at the peak of their activity. During this time there was trade of foods and other goods. The Anasazi had a diet of garden corn, squash, beans, gathered foods and hunted game. Because so much time and effort was spent feeding themselves, they focused very little on permanent homemaking.

They originally opted to spend only the coldest months under shelter. As time progressed, however, more and more houses were built. What they assembled for living quarters was a circular frame from ten to twenty-five feet in diameter. Surface sand was scooped away in a bowl-like structure with a place for a fire in the middle. The walls were logs stacked on each other and the entire structure narrowed at the top. Instead of a complete roof, they left a hole at the top to let out the smoke which would rise from the fire. The walls were then covered with mud to seal up the cracks. These structures are known as kivas. The Anasazi also used caves. Occasionally these caves would be used for living space, but their main purpose was for the storage of dried food.

Around 700 A.D., the Anasazi began a period of transition and advancement that changed them from the Basket Maker Anasazi to the Pueblo Anasazi. Pueblo was the name of the new building technique they were using. Around 1000 AD, masonry houses were being built with stones stacked on top of each other and mud being used for mortar. They began to build impressive dwellings, becoming expert stone masons. They increased the frequency and design of pottery making and discovered the use of the bow and arrow. By 1200 AD, village locations were being picked in spots that were safer and harder to attack indicating that war and violence were increasing. After that, for reasons largely unexplained, the Anasazi began leaving their homes and by 1300A.D, the Anasazi had disappeared.

Daily Life: What is known of the culture of the Anasazi can only be speculated through archeological finds, comparative ethnographic information and skeletal remains. It is most likely that they spent most of their time growing corn, their staple food. Researchers also believe that the women spent many hours each day grinding enough corn for the daily meals. This is reflected in the high incidence of severe arthritis found in female skeletons that would be caused by the continuous kneeling and rocking needed to grind the corn on a metate.

Meat and wood were fairly sparse so, for the men a lot of time was probably spent on hunting, and on wood gathering for the women and children. Religion was also very important and was closely interwoven with all other activities. Archeologists have also recovered toys, and "gaming pieces" which, though difficult to interpret, shows that the Anasazi had leisure time for entertainment. They had many games (gambling included), and sporting events (like running). Much of these were closely tied to religious events because of the gathering of people from several villages.

Best Known Features: One of the attractions of the Southwest to early explorers, archaeologists and relic collectors was the abundance, quality and variety of Anasazi pottery. Most Anasazi pots were made with round rather than flat bottoms. They did not have tables, so a round-bottomed cooking pot could be easily supported on a few rocks while heating up the stew. The pots were made from sandstone and shale clay, and covered in beautiful black or red geometric designs. The colors are carefully painted on with "brushes" made from the yucca plant. Though the ceremonial use of the pottery by the Anasazi remains unknown, one of their descendants, the Pueblo, who still make pottery today, believe that the spirit of Mother Earth that resides in the clay influences the design. Because of this belief, the pottery is made almost exclusively by women, though there are a few male "potters". This was probably the same with the Anasazi.

With the coming of Europeans, Anasazi pottery went into a decline. It was not just the beginning of metal pots and pans that gradually replaced pottery, but the European demands for labor and other disruptions that left less time for careful craft production. However, pueblo women continued to make pottery, and with the coming of the railroad and tourists, they found a market. In the last 60 years, quality has again improved, prices have soared, and the Anasazi pottery tradition appears to be far from dead.

For more information type Anasazi into your Search Engine.

Click to read a New York Times Article about the Anasazi by George Johnson http://www.nytimes.com/2008/04/08/science/08anasazi.html?_r=1&th&emc=th&oref=slogin