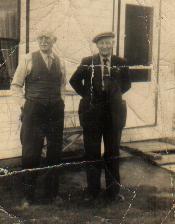 Alex was the brother of my Grandmother Jane, nee Cope (Noel) (MacDonald) Duncan. He and Grandma were the Grandchildren of Joseph Paul (Land Grant). Bill Duncan, my Grandfather, was a veteran of the First World War, and was badly wounded in action. He later became a policeman, special constable of the Royal Canadian Mounted Police.

This is a story he told me about the value of war. When WWI broke out he, in patriotic fervor, immediately volunteered to help defend his country and entered training. When the training chores were completed, his infantry regiment was shipped out to the front. After joining combat, which brought him face to face with the horrors of war, his sense of patriotic duty lasted for about a month.

It was the horror of watching friends and comrades die, or suffer horrible wounds, which pushed him to reassess why he had joined and to ask himself this question, why are Canadians here? After examining the issue he concluded that there wasnt any rational reason for it. The war, in his estimation, was a war between the Royal Houses of Europe and their republican allies, from countries such as France, for control of the Continent and had nothing to do with North America. He concluded that Canada was only involved because the United Kingdom was.

His conclusions about the Second World War were entirely different. He believed that an evil demon, Adolph Hitler, was unleashed upon humanity and that every decent human being was obliged to bring him down. The only reservation he had was that to a certain extent, by its mistreatment of the Germans after the First World War, the West had helped create him.