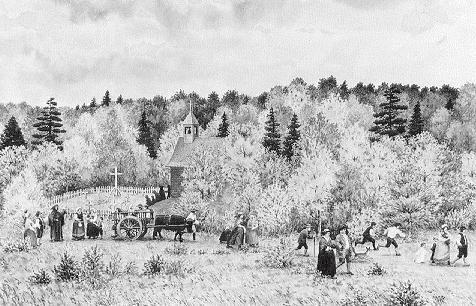 By 1713, the year France transferred its self-endowed ownership of Acadia to the English via the Treaty of Utrecht, the Mi'kmaq/Acadien relationship was so close that it caused the British to become paranoid about it. In fact, their paranoia was so bad that they tried to end it in 1722 by issuing a proclamation forbidding any social exchanges between the two Peoples. Dated August 1, 1722, by Richard Philipp, Governor of Acadia. Under its provisions it became illegal for Acadians to entertain a Mi'kmaq in any manner. How strictly it was enforced is reflected in the minutes of a Council meeting held on May 22, 1725:

The Honourable Lt. Governor, John Doucett, acquainted the board that Prudane Robichau, senior inhabitant in the Cape, had entertained an Indian in his house, contrary to His Excellency's proclamation, dated August 1, 1722. That he had therefore put him in irons and in prison amongst the Indians for such heinous misdemeanour. This was to terrify the other inhabitants from clandestine practices of betraying the English subjects, into Indian hands. A petition by Robichau for release was then presented to Council for approval: The said petition being read. It is the opinion of the board, upon account of his age, and having been so long in irons, that upon the offers and promises he made in his petition of putting up as security goods and other chattels for his future good behaviour, he be set free.

To date, Ive found no evidence that the 1722 proclamation was rescinded. However, after the treaty of 1725 was ratified by the Mikmaq at Annapolis Royal in 1726, it wasnt strictly enforced. During these years British authorities would at times take measures that penalized the Mikmaq or Acadiens, and try to play one party off against the other. It never worked, primarily because they communicated their experiences with the English to each other, and many of the barbarities committed against one party often penalized both.

For instance, there is convincing evidence that when bounties for Mikmaq scalps, including those of women and children, were offered in Nova Scotia by Massachusetts Governor William Shirley in 1744, prosecuted by the Bay colonys Captain John Gorhams bloodthirsty Gorhams Rangers, by Governor Edward Cornwallis's 1749 and 1750, and by Governor Charles Lawrence in 1756, many scalps of mixed bloods, as well as some full blood Acadiens, were also harvested.

RISSERS BEACH - Four centuries of Nova Scotia hospitality were celebrated Saturday as Acadians and the Mi'kmaq honoured the first official contact between the First Nations and the French at Festival Champlain.

The event took place at Rissers Beach Provincial Park on the South Shore, where a flotilla of vessels led by Bluenose II, using maps drawn by Samuel de Champlain, placed a high flyer buoy with Canadian and Acadian flags at their first anchorage in Acadia.

This was to mark not only the 400th anniversary of the first French settlers to Canada, but also to celebrate the Mi'kmaq who welcomed them ashore.

"I think that this is a national historic event marking a moment in history that has never been acknowledged before," event volunteer Yvonne Mosley said.

"I knew it was a very significant event, but I never imagined it would turn out this incredible."

A re-enactment of the landing was only part of a weekend full of events celebrating the merging of the two cultures, but for Wayne Melanson, who played Champlain, meeting Grand Chief Ben Sylliboy was the part that made it all real.

"The welcoming by the grand chief was very symbolic and very touching," he said. "I think the feelings of our ancestors on that day were transposed to us and it was very powerful."

But for many Acadians the important part of the festival was the opportunity to officially thank the people who helped them settle and shared their land with them.

The Societe National de l'Acadie bestowed its highest honour, the Leger Comeau Medal, on the grand chief and representatives.

"I'm so proud of my ancestors," Grand Chief Sylliboy said. "This is the strongest gift that the French people give. I think today definitely celebrates open friendship."

The medal is given for outstanding contribution to the Acadians. Society president Euclide Chiasson says it probably should have been given sooner, but the events of this weekend mark a new beginning.

"Today is a very symbolic and touching day," he said. "For years and years our people were together and then we drifted apart so maybe these events will bring us back together and we'll build an even stronger relationship than before."

He said he would recommend that the society and the Mi'kmaq meet yearly to work on projects like a common history textbook. The festival continues today with showcases of both cultures and events for all ages.